Yesterday was the Outlaw X half Ironman distance (a.k.a. 70.3) triathlon. It was the first edition of this particular race, and the first time I was to compete in an event organised by OSB Events. I knew my training had not been fantastic; I’ve been a bit sidetracked by a Skyrace in Italy next month (October 2019), as well as life and work. So it came down to one month of training to prepare!

One Month of Training

My main concern about the race was whether I would be able to keep going for the duration, as I have not done anything requiring this level of consistent energy output in at least a few months. Earlier this month I was lucky enough to receive an entry for the Great North Run and built up to that. I was pleased enough with the outcome of that race just three weeks ago, having pushed hard and finishing in a respectable time. As an aside, I ended up running the last 1.5 miles alongside Tania Farah (Sir Mo Farah’s wife) and was faced with the dilemma of whether to finish at the same time as her, to much press coverage, but kept true to my goal and dropped her in the last half mile.

Knowing that the ‘run’ part of the 70.3 traiing was covered, I spent some time on my TT bike indoors, using Trainer Road. I wanted to get used to the aero position to be able to hold it without too much discomfort, whilst putting out a sustainable power. I knew that I didn’t have too much time to spend on this, and hoped that years of cycling would see me through. I even considered what bike components to replace after the race…

The swim has always been my Achilles Heel on a triathlon, and this time round I decided that although my technique is, and has always been, poor by a triathlete’s standard, I would at least get into the pool and practice, and I managed to pop to Royal Docks in London to get in the water in my wetsuit, and cover the 1.2 miles.

Come race day, I had everything ready. I’d chosen my heavier but more cushioned Saucony Triumph ISO 5s as they’d done me well on the Great North Run. I even fitted triathlon elastic laces. My Cervelo P3 had my race day Zipp 404s on, and the rear hub had just been serviced and bearing replaced with Enduro ceramic bearings. I’d treated myself to a pair of new Aquasphere Vista goggles as on the (only) open water training swim I’d noticed that my old goggles fogged up quickly and didn’t have the same viewing angle, leaving me to feel a bit more claustrophobic.

The Race (a.k.a. an unfortunate cycle)

Me and a friend registered and racked our bikes on the Saturday, and attended the race briefing. I told myself if I hit my target time I would buy myself a much-needed new wetsuit, to replace my entry level one that’s seen about 7 seasons and is now extensively held together Black Witch neoprene glue. 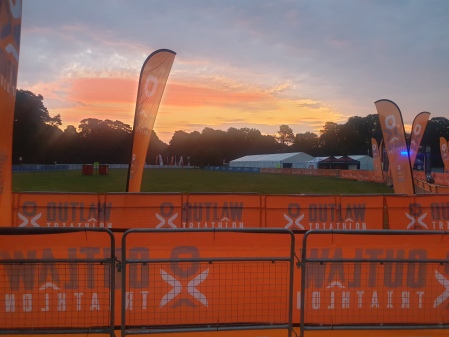 On Sunday, the swim was a deep water start in a lake. So not really that deep, but that’s what it’s called. 1.2 miles around the lake, zig-zagging through some additional buoys at the end to make up the distance. The new goggles were great – I could see everything clearly, and I purposely kept my pace steady, and heart rate low… This would not be where I make the best progress, so not point going all out too soon.

The transition was 500 metres from the water, and easy enough to run to. Running to the bike mounting point, I had a last minute change of heart about my shoes being attached the pedals, and had to slowly snap each shoe out of the Look pedal, put them on, then hop on the bike and set off. Not elegant, but better than trying to do a flying start on the bike without any recent practice and falling over.

I took a few minutes to acclimatise to the bike, and made sure I let my heart rate drop back down to threahold range after the excitement of transition. After 2 miles, my soggy right elbow pad flew off, leaving my arm resting on exposed Velcro in the aero position. A mile later, the right elbow pad flew off. Great. About 17 miles in I noticed I could feel the rim of my rear wheel on the tarmac occasionally. I pulled over and noticed the slow puncture. Using a canister of tyre repair spray I tried to fix the problem, but instead got the bike and myself covered in white sticky foam. I pulled out a CO2 cartridge instead, and accidentally let out half of it before affixing the chuck to the bike. I resorted to hand pumping. I decided to keep riding – the pre-race brief had stated that there would be mechanics supporting, so I didn’t want to lose any more time. Once I found mechanical support I could replace the inner tube and be rolling.

20 miles in and I could feel the same wheel rubbing against the brake pads. Upon inspection, when applying considerable force on the uphill, the wheel still had too much lateral play and was rubbing. I loosened the brakes and kept going. The rest of the ride was along the same lines – no mechanic was found, and as I got closer to the end of the ride I kept doing the calculations that it would take longer to replace the inner tube than to keep riding with an under-inflated tyre.

Back in transition I dropped the bike off, slipped on my shoes and ran to a particular race pace I’d pre-plannned. I think I was just so happy to be off the bike (which is normally my favourite discipline) that I just REALLY enjoyed the run. Three laps round the grounds of Thoresby Park, with plenty of food and drink stations. The terrain was undulating, with some compacted gravel paths and tractor paths as well as some tarmac. Some people ran round large puddles, but I would just take the straightest line from one turn to the next. The rain kept me cool, and I steadily picked off some of the many triathletes who’d overtaken me on the bike after my mechanical issues.

In the last mile of the run, I noticed an age grouper being cheered on by crowds, coming up behind me. I stitched up a gear and picked my pace up, their breathing dropping into the background. With them hot on my heels, I zig-zagged past many other runners (at this point there were lots of people who had now started the run), and sprinted down the carpet to the finish. I almost bowled over the lady handing me my medal! Best of all, as I passed under the finish line gantry, I looked at the clock and realised I’d just made it in under my desired time, so I guess I’m treating myself to a new wetsuit!

All in all, a great day. OSB Events put on a great inaugural race, and the volunteers I encountered were all wonderful. I’m not surprised that my bike stage was poor – I hadn’t trained enough, nor ridden my TT bike outdoors or even maintained it well enough. I’d say “lesson learnt”, but some part of me already knew this!

I was pleased with my run. And the swim. And that I didn’t have any issues with endurance. I know I need to spend more time on the TT bike before I next race it. Looking at events for 2020, I think based on this, I’d happily do another 70.3, but also some longer trail races too with similar terrain to the run stage.