I recently found myself in Seoul, and was taken aback by how it is surrounded by hills. Naturally I wanted to run up them!

I was staying in a busy shopping neighbourhood – Myeongdong, which was fortunate because my hot was disgnally opposite a four storey high The North Face store (it took a lot of restraint to walk out empty-handed!). As some of you may know, I’m a bit of a gear geek and I like.some of their serious mountaineering items as well as their alpine running kit.

The other advantage of staying in Myeongdong is that it’s just nort of Mt Namsam. There’s a cable car up it, or if you’re like me, you lace your running shoes up and run up in, after a couple weeks of hardly exercising, and have to dig deep to keep moving in the heat to the top.

Namsam isn’t high by any international standards, in fact it’s only just above 200m above sea level. However, rising out of the concrete jungle, through the forest, being serenaded by a million crickets and bugs, that was an enjoyable run.

At the top is N Seoul Tower, and busloads of tourists. There was even a martial arts display on as I arrived. After taking in the views in all directions, I chose a different route back down, all the way to my hotel.

This was a couple weeks ago now, but I’m remembering the run not just because of the experience, but because it is the start of my Autumn/Winter training. Next up, Great North Run this weekend, then the Outlaw X 70.3 two weeks after that. And then in October, I’m hosting my first training camp in North Wales… Stay tuned! 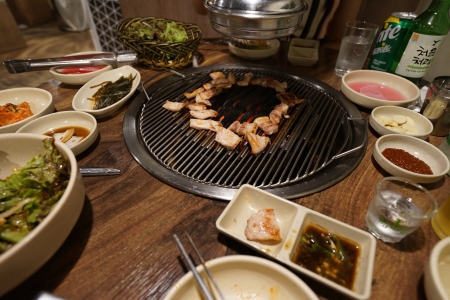