The first time I had a bike fit I was sceptical whether it was going to make a huge difference, but the bike that I ended up being matched with was the perfect fit. I was aerodynamic and efficient on this new bike, with everything measured to the millimetre and every angle spot on. This was the Orbea Orca road bike that I used on the Race Across America, and it was a dream to ride, it still is.

Last week I decided to take my five year old Cervelo P3 time trial bike to be fitted to me. I was anxious whether there was going to much they could do to improve my position and reduce the discomfort I felt in the aero position. Walking into the office above Bespoke Cycles in London, i was greeted by my bike fitter, who immediate noticed that the handlebars where angled far too low.

“We’ll need to flip the stem to angle it upwards” was his first remark. “But first, let’s check your body angles”. Meticulous measurements were taken, he assessed my stance when standing, he checked my cleat position on my road shoes. He checked the range of movement in my legs, noting the tightness in my quads and ITBs. Then he assessed me on the bike, sticking velcro stickers on me and attached a Retail harness to them so that his computer could track the three dimensional movement of my joints.

We started with the stem, inverting it to give it an upwards angle. Then the arm pads, widening them to my frame. Then the grip length. Apart from the angle, everything else was a minor adjustment, but the cumulative effect was that the discomfort on my arms and back were greatly reduced. Still, he was not satisfied: “we want you to be comfortable in this position for a long time”.

He adjusted my saddle height, and the position, moving it forwards and back, assessing the effect each minute change made on his computer that was still receiving feedback from the Retul harness. He stressed that even the pro teams had fallen foul of doing extensive wind tunnel tests but not assessing whether a rider could comfortably maintain the position, so he was keen that I had a balance of being aero and being able to sustain the position for 112 miles. He stressed that he didn’t want to cause any hamstring problems as it would cause problems on a run after cycling. He also asked me to focus on my pedal stroke, concentrating on the 12-3 pedal keeping my foot flat, as I’d picked up a bad habit of pointing my toes down the whole way through the stroke.

Almost exactly two hours from walking through the door, we were done. Looking at the before and after photos, I could not tell you which position “looks” better, but the final position defiinitely felt more comfortable.

I cycled home (noting that I was able to put a lot more power through the cranks, but that could just be because I was warned up compared to the outbound journey). I took my trusty Wahoo Kickr out of the box where it’s been the last two years and set it up with the Cervelo. Set up, flashing the Wahoo’s firmware, calibration comprising multiple spin downs, and an FTP ramp test and cool down was my workout for the evening. 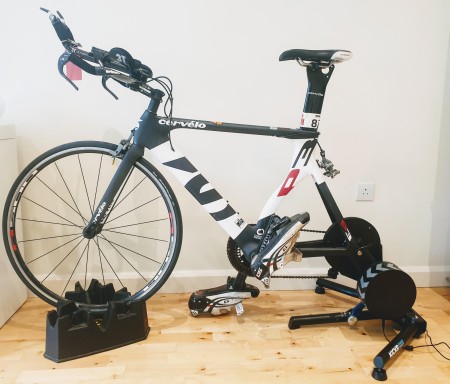 All set up and ready for action

Ahead of me is two months of turbo training, getting used to the new bike position, before the Outlaw X Half (70.3 distance triathlon). Why? Because I’m a fan of structured training, and I no longer live in an ideal time trial location. Will the change make a difference? Almost certainly. I spent hours on the bike in the aero position during fitting, riding it and setting up the turbo trainer. At the end, no discomfort. No discomfort means a better ride, which means a better run off the bike, which means a better triathlon time.