A week ago, I had the pleasure of riding to the continent from London to watch the Gent-Wevelgem road race, in the company of an enthusiast group of cyclists.

We set off at 9am, cycled out of central London through Canary Wharf, under the Woolwich Tunnel and soon were into rolling countryside. What started off as a leisurely ride out to catch an early evening ferry to Calais ended up being a race to Dover after some unexpected stops due to punctures. The ferry itself was an uneventful experience: a quick carb-heavy dinner in one of the on-board restaurants.

One of the riders was joining us from England in the morning. The guy had finished work, gone to a formal dinner and cycled from midnight till morning to reach Dover. Four of us waited at Calais for another 40 minutes whilst the other 19 cyclists rode ahead. Having never met the guy before, I assumed he would exhausted after a packed day, 90 mile ride and one hour sleep, but he turned up off the ferry looking eager to continue. The other four of us agreed to keep him moving, and within two hours of hard riding we’d caught up with the main group in Dunkirk. We stopped for a hot drink then kept pushing hard to Bruges. We negotiated closed sections of road, eerily quiet residential neighbourhoods and unceremoniously crossed the French-Belgium border.

Soon we were on canals. At first, I loved the wide cycle paths. Then I realised that the pancake-flat landscape gave me no excuse to stop or even adjust my body position. We were time-trialling along the flat, mile after mile. I was so glad that I wasn’t the first to break and ask for mercy from the pace, but by the end I was suffering, and our sleep-deprived fellow rider even refused to use his brakes as he “didn’t want to waste any forward momentum”! Pulling in to Bruges made the day’s exertions all worthwhile – it was so picturesque, I was immediately drawn to taking photographs of its cobbles, quaint architecture and waterways. 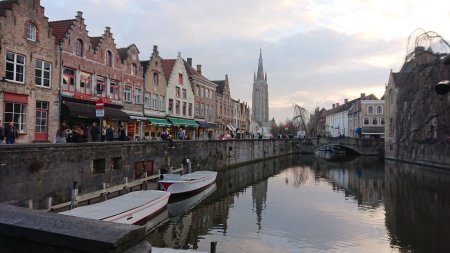 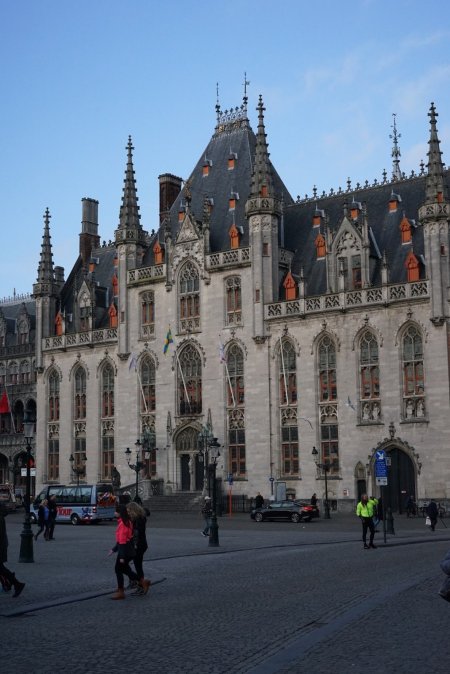 An impressive edifice in the centre of Bruges

After a good social evening in Bruges, we set off the following morning as a pack of 23, for the famed Belgium cobbled climbs of Oude Kwarement and Paterberg. Somehow I found myself leading the ride out. As we segmented, every time I tried to drop off the front group I was told I had to stay in front because I had a Garmin! At our first major regroup after an hour of cycling through farmland, we did our usual headcount, and spotted we were one rider down. I went back with a couple of riders to try to hunt them down, but to no avail. We returned, forming a chain gang, head down, to catch up with the others.

Without many more route-finding issues, we found our way to the cobbled climbs. We spotted a pro team out training, and dozens of riders, many in club attire, all buzzing around the landscape and taking in the cobbles. I have to be honest, I didn’t know what to expect, and when I started on the cobbles, I kept a steady pace and persevered till I quite unceremoniously reached the top. After the second ‘big’ climb of the day, I decided to return to the bottom and climb it again! I was surprised to see club riders who had come all this way to just cycle up the rain gutter on the side of the cobbles. I was even more surprised when I realised that the cobbles had vibrated my handlebars downwards by about 15 degrees (I guess my new 5Nm torque key isn’t as spot-on as it claims). 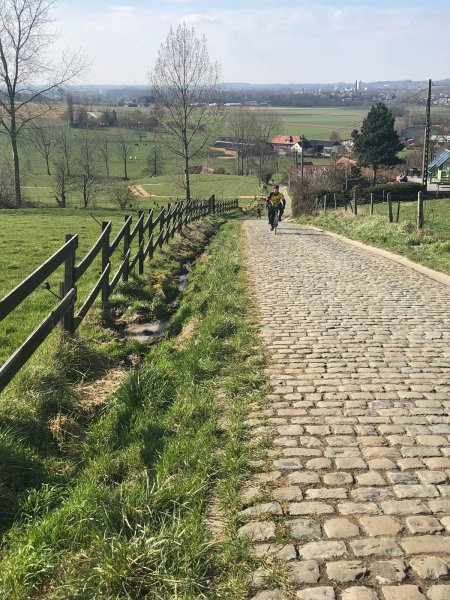 A rider tackles the cobbled climb of the Paterberg

After the cobbles, there was a small debacle involving one of our support vans and an uninsured local. That put paid to the club’s lunch plans, I found myself leading a slower group after a brief supermarket stop for food. I set my Garmin to beeline to Ypres (Iepers), and through some nifty route planning, we caught up with the rest of the pack, and were all directed onto what I would call a cyclocross trail along a canal. After some final group photos, I found a friend who was up for motoring back, and we threw all we had left at getting in to Ypres via Kortrijk in a timely fashion.

Ypres to Lille to London

The final morning was spent visiting the Roeslare Cycling Museum, which is currently located in the Fathers’ Church. Whilst Polenplein is being refurbished, this church provided the perfect backdrop to the exhibition “Cycling is a Religion”.

A cross made out of bike frames, in the Fathers’ Church, Belgium 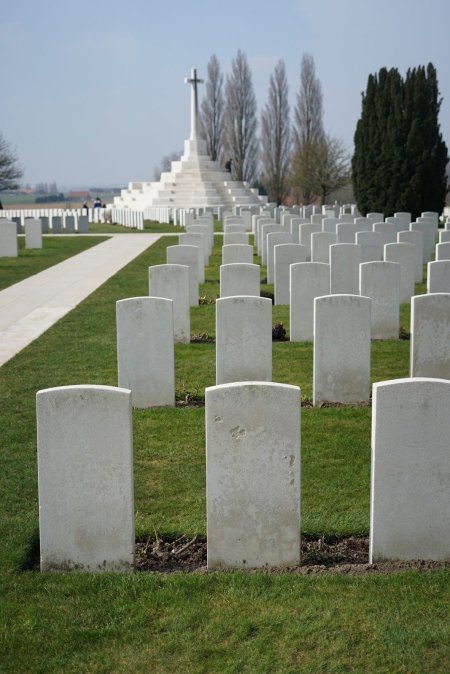 Just one WWI cemetery, outside of Ypres

In the afternoon we rode back to Ypres via a couple of World War I sites. Visiting cemeteries and having listened to the Last Post sound at the Menin Gate the night before was a very sobering experience, and we were each left with our own thoughts on the return journey to Ypres.

Finally we watched the Gent-Wevelgem race. The pace at which the pros ride over the cobbles was inspiring! After a final night of reveling, we found our way to Lille and then onto a Eurostar back to London. All in all, a great cycling-themed trip away!

A podium finish for an under-23 British rider