Despite best intentions to get an early night before the marathon, I found myself still sat at an Italian restaurant carb-loading on pasta and pizza at 10pm, and still sorting out my race day clothes, food and kit bag at about midnight. I drifted off to sleep wondering what the day ahead would hold in store for me.

At 5am on race day I was already up, showered, dressed and out the door en route to one of the rendezvous points where the race organisers had organised coaches to shuttle us to the start line in Marathon. The race entry comes with a travel card for the city so all public transport was free.

The starting area was well-appointed in the stadium in Marathon itself, with music, plenty of stewards, information points and over 200 toilets. DHL handled the logistics of getting runners’ kit bags from the start line to the finish line. There was a swirling vortex of hundreds of runners warming up on the running track, observed by throngs of other runners sat on the bleachers, covered in clear plastic bags for warmth. 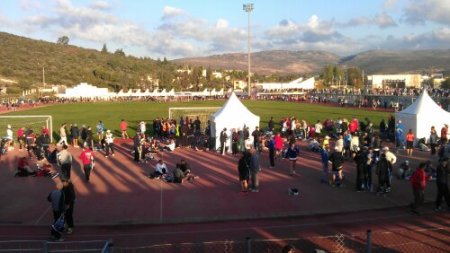 At 9am sharp, the race got underway to the sound of music and fireworks (the first time I have seen fireworks in broad daylight). I was fortunate enough to also get a glimpse of Raymond Bett at the start line shortly before he smashed the Athens Classic Marathon record in 2 hours 11 minutes. The course was much like the course description promised. The first 8km flew by, with patches of supporters cheering “Bravo, bravo!” and children handing out small olive branches. After this point, however, the uphill began and continued for 20km. As we ran through towns it was impossible to resist the urge to speed up as bands played, locals danced, music blared through speakers and always there was the chorus of “bravo”! The only respite from the hills came near the end of the course as the last few kilometres descended us into Athens.

The final 2km were great- running through the city centre, with crowds on either side cheering runners on in various languages. When I was just a few hundred metres away, it dawned on me that I was going to actually succeed in completing this marathon in one piece, which spurred me on to a sprint finish, running into the ancient U-shaped Panathenaikon Stadium. The medals looked great runners even got a post-race feed bag.

I’ve read reviews of this marathon which have said it’s not the most scenic or easiest marathon, but it was a privilege to run the original route from Marathon to Athens as opposed to running in a loop around a city, and I always thought that marathons weren’t supposed to be easy! 🙂