I’m in Kansas! Wow a lot has happened since we set off on Saturday afternoon on the Race Across America (RAAM) as a four person team. I’ve not had more than two consecutive hours’ sleep in the last eighty hours, so this post is going to be less prosaic than I’d like…
Great start in Oceanside, California on Saturday. Before I knew it we were heading to the mountains. Temperatures soars to the mid forties (~120F). One tyre started to melt on a new road in the heat. On one mountain climb, crew were splashing water on us every ten minutes to keep us cool.
One of the other riders in the team got to ride the ‘Glass Elevator’ down to Borrego Springs. This is an amazing winding descent into the desert; a must-do for any cyclist who’s in the area!
The desert was, unsurprisingly, even hotter. Unpleasant heat and a dust storm. Fortunately, before we knew it we were in Arizona. Arid, dry heat, and lots more desert. Desperate times trying to stay cool, even off the bike – lying on the bed with clothes soaked in cold water draped on me.

As we rode towards Utah, we were greeted with fantastic scenery in Monument Valley, like driving through an episode of Road Runner (see photo below). 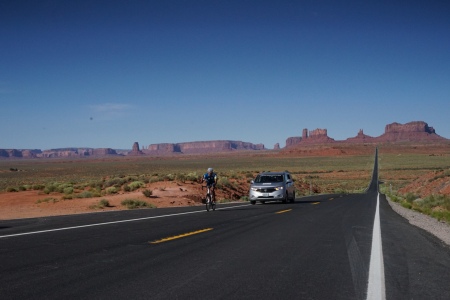 All too soon, we were in Colorado and facing the Rockies. Myself and one other racers ended up pulling the shift to climb the highest peak of the entire 3000 mile race, crossing the Continental Divide in the process as we reached the top of a 3000 metre mountain pass.
Colorado finally yielded (via a few more mountains) to pancake-flat Kansas, but not before some action off the bike. I suffered with a bad stomach and another racer got a chest infection, but no stopping. At one point we temporarily lost the active racer, and at another point the racer was navigated the wrong way. As sleep deprivation crept in, a couple of spats occurred between the wider team members (racers and crew), one possibly to the detriment of the team’s performance in the race. It happens.

South West Kansas: in the evening we were greeted with a storm. I raced through gale force winds, with lightning starting fires, and golf ball sized hail stones. I cycled through flash floods in town (Ulysses). The wind was so strong that when I was off the bike and holding it by the handlebars, the whole back of the bike lifted off on its own.

Still in Kansas today, but making good progress (we’re covering about 400 miles a day). We’ve overtaken another team, which means we are now fourth I believe. In fact, we’ve just crossed into Missouri.

We still have a long way ahead, notably with the Appalachian mountains to contend with before finally reaching the finish line in Annapolis, Maryland…