Last weekend I was resolved to hit my goal of climbing 1000 metres with a heavy load, in preparation for Denali. Up at 6.50am, picked up a couple of friends, fuelled up with Little Chef’s legendary Olympic breakfast, then drove to Llanberis to start the ascent of Snowdon.

I have climbed Snowdon numerous times but this is one route that I have not taken before. With a 23 kilo rucksack on my back and my double boots on, we pushed off from the car park, past some houses and up a wide path.

Plodding uphill we passed some casual walkers, but more often than not we are overtaken by those fortunate enough not having to carry a heavy load. It started raining again, but was warm.  Further up, the rain turned to hail. Lines of inadequately dressed people shivered on the side of the mountain, waiting for their slower comrades. 2 hours into the plod, we reached the tunnel under the railway line. Turning right from under the tunnel, there were snow covered fields all the way to the top, and relentless showers gusts of wind battered hail against our exposed faces. 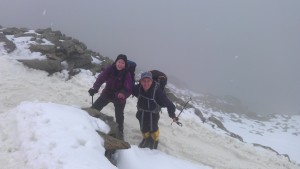 Walkers prepared for the snow and slush descending Snowdon.

If you have never been up Snowdon but have been up other mountains, it is a surreal experience. We passed a man kitted out in shorts and t-shirt, a lady descending in leggings and a little dress, and several people in fancy dress! Just beyond the summit, there is a cafe where hundreds of people mingle and warm up. A fair few of these people probably take the train to the summit (I didn’t believe that there was a train to the summit when I first heard it, either!)   Basic mountain etiquette is thrown out the window, children run around and stag groups parade around the summit triumphantly dressed in alpine lederhosen!

We descended down the Miner’s track and enjoyed increasing views looking out onto the Snowdon Horseshoe. Hail and snow was replaced by a calm afternoon breeze with the sun filtering through the clearing clouds.

Overall, a successful training day, made more enjoyable by good company and entertaining strangers, followed by a great celebratory evening in Betwys!